Pão de Açúcar Hotel, part of a beautiful building which construction began on the September 1st 1939, and ended in 1945, project of the authorship of Engineer Ferreira dos Santos, opened officially its doors on the August 15th 1953.

Previously to its opening, and in the middle of the 40’s decade of the last century, the building belonged to a nursing home to elder people located in the 6th floor, being the remain floors dedicated to the Sindicato da Casa Têxtil corporativo (Union of the Textil House corporate). Relatively to the interior staircase, truly ex-libris of the interior design of the building, its authorship is given to the renamed Architecture Germano Castro Pinheiro, which had the boldness of creating, at the time a model truly atypical in the trends of the Art-Deco Liberty.

The spiral staircase, true point of attraction of the Hotel, is nowadays object of attention to the countless international and national architectures that don’t hesitate to qualify this work of art, following the concept of Spiral Staircase.

Therefore in 1953, this unity known as Pensão Pão de Açúcar, property of the founder Luís Von Haffe, had in its nomenclature a concept and expression, capable of potentiate and attract an important niche of the Brazilian market, moreover, high in the remote 50’s. In that way, the Name Pão de Açúcar, inwardly related with the Pão de Açúcar Hill in the Rio de Janeiro, Brazil, gives body and life to this Hotel, since 60 years ago to today.

In the 50’s and 60’s decades, and for the proximity inherent to the mythical Teatro Sá da Bandeira, this hotel unit starts to receive with frequency countless personalities connected to the artistic world, from Theatre, Cinema, Music, Politics and Business. 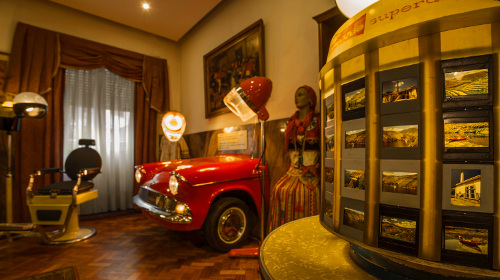